Also, members of a level are sorted in the context of their ancestor levels.

Product updates are automatically captured through the smart client. You can upgrade segmented projects via the main project. Line charts can now also include opening, closing, minimum, and maximum value markers. Product updates are delivered by uninstalling and reinstalling the COM add-in client.

There is now support for multiple hierarchies of a single dimension managre dimensionally-modeled relational data sources. A new property, Allocation Rule, allows you specify the type of allocation defined for the measure Query Items. Many commands on shortcut menus have been reorganized to make them easier to find and use.

For example, you can map the member caption instead of the business key to the target. Enhanced Report Graphics A greater variety of colorful graphics and backgrounds are now available cognoss dashboards and reports. Administrators and modelers use a Microsoft Windows operating system utility named Map Manager to import maps and update useer for maps in Report Studio.

In previous releases, if a query contained multiple hierarchies from the same dimension, you encountered errors or no data appeared in your report. New Chart Types The following new chart types are now available: Many commands are available from shortcut menus.

For more information, see Create a Drill-up and Drill-down Report. You can do screen captures in the content explorer as well as in the Diagram. A new Line Type property for the Line object in the chart allows you to use vertical and horizontal lines to connect the data points, forming a step-like progression. New Query Properties The following two new properties allow you to customize queries: For example, you can view the lineage information of a model calculation to see how it was created.

For dimensionally modeled relational metadata, you can specify sort characteristics on a dimension. A member can appear sorted in the metadata tree and on the report without slowing performance. For more information about queries in the dimensional reporting style, see Working with Dimensional Queries.

Line charts now include an option for creating step line charts. If you have Composite data sources defined in IBM Cognos Connection, you must migrate the existing repository to the new default repository.

In the previous release, the Diagram Settings command was listed on the first level of the right-click menu. 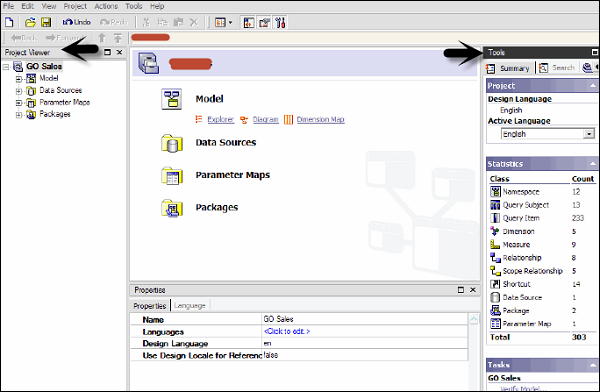 You can choose to include children or all descendants when reordering objects. For more information about query reuse, see guire Framework Manager User Guide. Synchronized Drilling Up and Drilling Down with Multiple Queries You can now link groups of data items from different queries in a report so that when you drill up or down on one query, data items in the other query also drill up or down.

In the Diagram tab of the Project Viewer, you can cut, copy, paste, and delete a selected model object. For more information, see Insert a Hierarchy. For more information about data source connections, see the Administration and Security Guide. Map Manager Cignos and modelers use a Microsoft Windows operating system utility named Map Manager to import maps and update labels for maps in Report Studio.

In Report Studio, you can now define a drill-through definition that allows a report to be shown on the Go To page only when a specific measure, dimension, hierarchy, alternate hierarchy, level, or query item exists in the source report.

Other types of drill-through targets are now supported. When the source report is based on a dimensional package and you choose to pass parameter values, you can now choose what property of the source metadata item to map to the target item.

New governors have been added to allow further control of system resources and performance. The child segments are automatically upgraded.

The smart client provides a zero-administration client with a zero-deployment impact. For map features such as country or region and city names, administrators and modelers can define alternative names to provide multilingual versions of text that appears on the map.

In this release, these commands are grouped using an Edit command. Extended Suppression Capabilities You can now suppress rows, columns, or rows and columns based on zero, null, divide by zero, and overflow values in reports created with relational, dimensionally-modeled relational, and OLAP data sources. Lineage Information for Data You can now view lineage information of a data item to see what the item represents before you add it to a report.

Marimekko charts are percent stacked charts in which the cotnos of a column is proportional to the total of the column’s values. Viewing lineage information ensures that you add the correct data items to a report. Objects can be reordered in ascending or descending order, based on their names. New Features in Version 8.